When Iron Wills Design with Iron Age in Mind…

WHEN serendipity makes the occasional appearance in your life, it can develop into a wonderful experience. I’m a big fan of the happy coincidence.
Some years ago, we had the great pleasure to meet and spend some time with Rora Paglieri, at the retreat she painstakingly created for herself in the north east of Scotland, near the town of Cullen.
A successful businesswoman who grew up in northern Italy where houses were smothered with floral exotica and the outdoors heavy with the scents of all that are so evocative and appealing, she took on a mammoth challenge to re-create something similar in a very different climate!
All of the great garden designers have been known to take on projects others could never even start to contemplate. That’s what sets them apart; they had the vision and determination to see the job through, no matter how daunting.
It was unlikely then, that she should choose that far-off corner of Scotland to set her master plan in motion, but that’s exactly what she did, and triumphed, despite fickle weather that can turn a summer’s day into a miserable affair.
This expert horticulturist, who was just as adept at cultivating organic veg as planning beautiful formal settings or nurturing difficult-to-please orchids, possessed that rare kind of vision that all of the great masters enjoyed – AND the energy and skills to see them completed.
An executive in the luxury soap trade, and more used to the sampling the good life in New York, Milan, and the Far East, she had to all intents and purposes a blank canvas (albeit one which was half-buried under swathes of nettles and brambles which had colonised the plot) when she first set eyes on the derelict farm property at Carestown, near Deskford, in north Aberdeenshire.

Today, it is unrecognisable and serves as an inspiration to anyone who ever fancied waving a magic wand over a barren acre or two.
She even introduced a romantic touch of the classic Italian palazzo by creating a heated pool concealed cunningly under the front lawn!
It was in 1986, while visiting friends nearby, that she first decided she had found a goal which was impossible to resist.
What she went on to create was so breathtakingly beautiful, that the property was very soon added as one of the country’s most spectacular attractions under Scotland’s Gardens Scheme.
And this is where the coincidence appeared to take things on a hugely entertaining and unexpected detour. 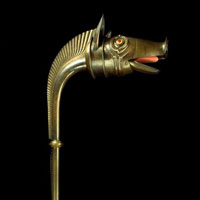 One night while sharing some wine and chatting, Brenda was browsing through a coffee table book and was amazed to find a feature on the Carnyx – a replica of the ancient Celtic war horn dating back to circa 80-200AD, and discovered in a field nearby, that had been made by John Creed.
She let out a cry of delight and revealed that he had been her favourite tutor when she was studying silversmithing and jewellery design at Glasgow School of Art.
Fragments of the bronze head of the Iron Age trumpet had been unearthed in 1816. Found in a field near to Carestown, where it had been placed in a bog, possibly as a precious object left as a votive offering to the gods, this masterpiece of

early Celtic art, shaped to resemble the head of a wild boar with its upturned snout, would have been a highly prized item.There was a widespread belief that wet locations were sacred places where you could have contact with higher realms. Valuable finds often occur in peat bogs where they had been deposited as gifts to win a deity’s favour.
Rora told us that she intended to create a full-size maze that would have an outline and shape that represented its profile.
John Creed is an exceptional, multi-award winning master silversmith, metalworker and sculptor. He completed the mammoth task after 400 hours of work, and we had heard the instrument played in Glasgow Cathedral by the renowned music professor John Kenny, during the city’s Celtic Connections festival.
What happened next was quite amazing…

Rora was intriqued and wanted to know more. She would love to meet John Creed, she said, and wondered if we might ask if he would like to come for a visit so she could quiz him on all things Carnyx.
Luckily, Brenda had kept in touch with John and his wife, Gisella…and this is how we came to get the chance to play the instrument on the very spot where the original had been dug up, as John had kept the first of TWO replicas he had made and brought it with him to surprise us all when we all headed for Carestown, a few weeks later.
You can imagine the delight on Rora’s face when he produced his amazing creation and said we would all get the chance to give it a blow, if we could raise enough puff to send its distinctive throaty call drifting out once more over the moors.
What a wonder it was to marvel at how those threads that had drawn us all together, culminated in such a momentous way.
Sadly, this inspirational woman is no longer with us. She is rarely far from our thoughts and when remembered, always with much warmth and appreciation.
When we were staying with her, Brenda admired an embroidery she had made that featured a naively-designed figure of a lion done in almost Medieval style.
When Bren got back to her workshop bench, she set about making a lion just like Rora’s in the form of a silver brooch, as a gift for our gracious host, and it subsequently became one of her most prized possessions. Meanwhile John presented us each with a solid silver brooch he had produced in the form of his Carnyx and that became one of our most treasured possessions too.
Rora once told us that, being from Italy, her pet hate was the long Scottish Winter which always left her longing for the return of Spring.
“I detest the months from November through to February. If they could be cancelled from the calendar, I would be very happy,” she confessed.
On the question of the sheer scale of her personal achievements, she was very matter-of-fact, saying: “I am a person who is full of hope so there was never any doubt or question mark over the eventual outcome.”
There is much talk these days about considering stay-at-home breaks instead of jetting off when holiday time comes along. The north-east coastal trail that threads across from Cullen, through Portsoy, Banff and Macduff to Fraserburgh, is filled with riches.

* Creator John Creed describes how he made the replica instrument in this short video.

Back to index
Memories Are Made Of This

Opportunities Neglected Can Never Be Recovered
Scroll to top