I’VE always been intrigued by this thing we have in Scotland called the Auld Alliance.
It’s not so widely spoken about these days, suggesting, maybe that it doesn’t come up anywhere on the school curriculum.
Curious, I ran a straw poll online to find out what others had to say, and most of those who responded said, shamefully, it had never been brought up at all during history lessons. Some said it had been mentioned “in the passing,” and only those who were fortunate enough to have teachers who were passionate about and well-versed in Scots history, told the story in full.
So, those who know their Scots history, know all about it, and I’ve found that very often it’s the French who keep it alive as an important link with the past, as well as a precious, continuing thread to keep up ties they wish to have with their Gallic “cousins”.
Whenever we’re in France, I like to test it out to confirm that it is still alive and well.
A few years back, I thought I’d try a cheeky ploy to check if French people I encountered would react in a positive way when enquiring if they could converse in English, by asking “parlez-vous Écossais” instead of “parlez-vous, Anglais.”
It is widely known that the French have a tendency to react in a negative way if asked the latter. You will virtually always fare much better if you do your best to communicate in their own language, or at least attempt to, no matter how badly. They WILL appreciate that you tried.
Interestingly, that sneaky back door way to let them know you are a Scot has always worked a treat.
Once in a little town where we stopped to buy provisions just on the other side of the English Channel, en-route to the Côte d’Azur, I tried it out when purchasing some bread in a local boulangerie. The lady serving responded excitedly by letting me know to “stay there” while she disappeared through a curtained opening to the domestic side of the property calling out “papa” as she went, and emerged a short time later with her elderly father holding on to her arm.

He was tearful, shuffled around to the front of counter and embraced me warmly as if I was a long-lost friend he hadn’t seen for years. It was enormously moving and just a wee bit embarrassing too.
We were told that when his community was liberated by the Allies following years of Nazi occupation and brutality, it was a Scots battalion that led the offensive – and they partied so much he still recalled the celebrations. 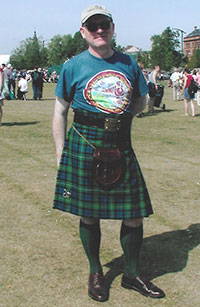 On another occasion while in Nice, I decided to wear the kilt as we went out to join friends for an evening meal and, walking through the town, as different groups of young people came towards us, they tugged each others’ sleeves and half whispered, “Écossais, Écossais!”
The single most impressive experience, however, also happened in Nice when I was there on a different occasion as part of an organised press trip.
We were treated to a very special dinner in one of the smart restaurants and, place settings determined that I was seated next to Philippe Bellissant, who was at that time in charge of marketing at Nice International Airport.
He was delighted to learn that I was from Scotland and in the conversation that followed, put me to shame with the depth of knowledge he had on MY country and its long history. 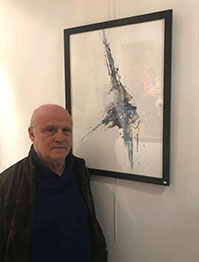 He had, he said, learned much about Scotland’s tumultuous past and the strong traditional ties we had with France through the Auld Alliance, initially while studying at school, and later grew to have a great love for all things Scottish.
The following year, he visited with his family, and I arranged to take him to my home town of Selkirk, to meet up with some of the Royal and Ancient Burgh’s historians, and then went with him to Langholm for the Common Riding celebration which he already knew all about and understood. Philippe is now a well-established painter whose abstract work attracts a lot of attention from collectors. We remain in contact.
So what exactly is this Auld Alliance and how and when did it begin?

…well it sure isn’t something akin to a secret society that’s acknowledged by a nudge, knowing wink of the eye or a fancy handshake. No sir – far from it.
This is a special bond cemented in place over seven hundred years ago and so strongly built in to the French consciousness that its pulse still beats strongly today.
The only time you might find things put temporarily on hold is when the two nations meet on the rugby field or soccer pitch. When the final whistle blows, regardless of the result, all will be good once more.
Back when the Auld Alliance was first conceived, the two countries joined forces and teamed up to form a super force that would be big enough to take on and beat the common enemy – England. That happened in 1295/6 when it was agreed they each shared a need to block English domination.

It was first and always a military alliance against the common enemy.
Between 1419 and 1424, 15,000 Scots sailed from the River Clyde to fight in France. In 1421 at the Battle of Bauge the Scots dealt a crushing defeat to the English and brought down the Duke of Clarence.
Honours and rewards were heaped upon the “tartan army” by the French. 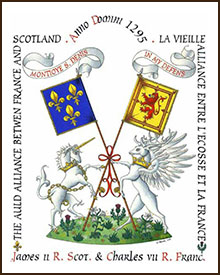 Our willingness to answer the call to arms resulted in some disastrous defeats, however, most notably the slaughter at Flodden Field in 1513.
The so-called Hundred Years War (1337-1453) between France and England had cemented Scotland’s relationship with the French. It also gave numerous opportunities to adventurous Scots soldiers of fortune to carve out a career for themselves.
Their great period was the last stage of the long war, beginning after the French catastrophe at Agincourt, 1415, when the Dauphin begged Scotland for help ‘in our great want and necessity’. The Scottish Parliament sent a force of 6,000 men, commanded by the Earl of Buchan, Archibald Douglas, Earl of Wigtown and Stewart Darnley.

Soon after this, the Scots Bodyguard of the French king – Les Gendarmes Écossaise a regiment of mounted knights – was formed. It was at this time that the French coined a saying: ‘fier comme un Écossais’ – ‘proud as a Scotsman’.
Another dark chapter happened at Vernuil in 1424 when a Scots army of 4,000 men was annihilated. As mercenaries they could have expected no mercy and those who were captured were dispatched on the spot. Despite their defeat, though, the Scots’ sacrifice bought France valuable breathing space that effectively saved the country from the English aggressors.
Joan of Arc’s personal standard was painted by a Scot, and his countrymen fought under her command when she relieved the Siege of Orleans and at the battles of Jargeau and Patay in 1429.
The military alliance more or less came to an end in the mid-16th century when the Reformation brought about a required realignment of Scottish foreign policy. Even so, the Scots regiments remained in the service of the French king.
Interestingly, the form of Protestantism that was established in Scotland followed the model set out by Calvin, a Frenchman, to give that most Scottish of institutions, the Kirk, real French roots.
When Scots noblemen accepted the purse of gold that was offered to support the Union that made Scotland part of the United Kingdom, inevitably conflict of interests followed and with Scotland inheriting English traditions of foreign policy, throughout the 18th and early 19th centuries, when Britain and France were locked in a struggle for empire, Scots found themselves battling their auld allies. But, they might also find themselves fighting fellow Scots at the same time, for there were still Scots in the French service and France had offered a refuge to Jacobite exiles.
The Royal Écossais remained a regiment of the French army. Indeed after the failure of the ’45 Rising, two other French regiments were formed from Jacobite exiles.

The Auld Alliance also brought considerable commercial benefits, which was founded on the Scots love of good wine. Due to the special relationship, Scottish merchants had the privilege of selecting the finest for themselves, much to the chagrin of our neighbours south of the border.
Although the arrangement was rocked by the Reformation, and trade between Protestant Scotland and Catholic France became more problematic, there were ways. . .
Despite the changes, records show that wily merchants were still going to Bordeaux in order to bring back their favourite wine as late as 1670. And, even after the Union of Parliaments with England in 1707, claret continued to be smuggled into Scotland, thus avoiding taxes.
The original alliance granted dual citizenship in both countries but was eventually revoked by the French government in 1903.
In 1942, when General Charles de Gaulle, then leader of the Free French, visited Edinburgh, he said: “I do not think that a Frenchman could have come to Scotland at any time without having a sense of a special emotion – awareness of the thousand links, still living and cherished, of the Franco-Scottish Alliance, the oldest alliance in the world.
“In every combat where for five centuries the destiny of France was at stake, there were always men of Scotland to fight side by side with men of France and Frenchmen feel that no people have ever been more generous than yours.”
That’s probably a hefty bit of a history lesson for many fellow Scots, yet the French know their history well and understand what it is that makes the bond so treasured.
In all of the years I was at school, I never once learned anything about the Auld Alliance and I very much suspect that it’s the same today for many young Scots.
Why might that be, you may ask…and if you then take a little longer to consider it, you’ll soon get the answer.
Meanwhile, I urge my fellow Scots to enjoy the camaraderie and conviviality that is available to them whenever they visit France.
I doubt if the French will ever forget.

If You Dream Of Sampling Venice Carnival. . .
Scroll to top