That Phenomenal Thing Some Know As Shetlag

ONE of the most amazing people I ever met was Davie Henderson.
He was so downright honest and sincere, had such a great sense of humour and mischief, and SO much passion for his homeland, that he gets the credit for making me fall in love with Shetland.
Davie had that rare ability to leave you feeling every bit as enthusiastic and excited as he was, just from having spent time in his hugely infectious presence.
After that, drawn in mainly by his influence, Brenda and I soon fell far more deeply enthralled by the place – and its people.
Davie and I had first met when we were each invited as delegates to attend the extraordinary annual musical jamboree that is Folk Alliance International.
That year it was staged in Toronto and as we were both flying from Scotland, we made contact beforehand and consulted on flight booking plans in order to travel out there and arrive together.
We hit it off, of course. Everyone who met this most naturally gregarious man for the first time and had the good fortune to get to know him would conclude that he was their kind of guy.
He had been to FAI before in his capacity as the main programmer for Shetland Folk Festival, booking artists from around the world to come in and bolster the multitude of home-based musical muscle that exists in these most northerly isles.

So, all of that to salute someone who was to become a great friend and who, very sadly died suddenly and unexpectedly in 2014, delivering a shock wave across the community.
Yes, Sir, we loved you, brother.
And we love Shetland Folk Festival, and those who continue to carry the torch that was handed over to them too – all fiercely determined to stick to the same vision he had to continue to make the event a world class gathering with a pedigree the envy of others.
So, let me say something about Shetland Folk Festival, just in case it transpires you’d be a first-timer if you decided to make the effort to attend the next one…
Firstly, it’s well worth making the effort to reach Shetland by ferry.
Those who fly may get there quicker but in doing so they miss out on one of the event’s surprise attractions.
The overnight sailing from Aberdeen takes twelve hours and those with the stamina for it can spend every single one of them enjoying numerous warm-up sessions in the presence of most of the visiting musicians who head for the bar, stake their claim on a performing pitch and settle in for the trip.
This legendary event has been going strong for over forty years is on every thinking musician’s wish list.
You are guaranteed to enjoy a helluva hoolie in the company of a premier league get-together in the lounge bar of the big Northlink ferry, Hjaltland as she sets sail.

Shetland prides itself in combining world class acts from overseas with cream-of-the-crop local attractions. They always end up with a thoroughly eclectic and well-balanced mix.

Daily programmes bring together sample groupings at various venues in Lerwick and outlying areas, to make sure that Shetlanders who live far beyond the capital get a chance to taste a flavour of what’s happening, right on their own doorstep.
Visitors are encouraged to book tickets far in advance for the concerts they want to attend. It’s a must as everything sells out, although those who neglect to do so still have much to enjoy including the spontaneous side show sessions which always attract the crowds – especially late at night and into the wee sma’ hours – in the main hub – the festival club – in Lerwick.
The weekend gets underway on Thursday afternoon with a ‘shop window’ showcase to welcome participating acts and give each of them a ‘one number apiece’ chance to impress the audience, some of whom are so keen for a good seat, they turn up two full hours before kick-off.
At night there are five different concerts happening simultaneously in various locations, each involving a must-see selection of acts, and when the weekend draws to a close on the Sunday night, three “foys” – you could almost call them revolving-doors variety shows – are staged where all of the main acts (fifteen in total) play in rotation and are bussed from stage door to stage door.
If it sounds like a recipe for disaster, with each artist given fifteen minutes of performance time, and all conducted entirely by volunteers, in reality it runs like well-oiled clockwork.

Some of the outlying communities host their shows in village halls which hold little more than a hundred people. The main arena is the very smart Clickimin Leisure Centre in Lerwick, built to seat over eight hundred. This is a tough festival to do thoroughly from start to finish and requires equal amounts of pace and stamina. You see some casualties wandering the streets dazed from never making it to bed at all. They call the end-of-the-gig condition Shetlag.
And when The Unwanted’s Seamus O’Dowd took the stage for the band’s final performance of the weekend, he declared: “We’ve had a great time here at the anniversary of the International Sleep Deprivation Society.”
A fundamental element of this festival is the inclusion at its very heart of both upcoming and well-established local talent. They get the opportunity to showcase and shine, and of course, the chance of a lifetime too – a jam session with some of their very own heroes. Last time I visited, the festival’s commemorative beer mats carried the legend – ‘No Sleep Since 1981.’
The more seasoned attendees, who’ve probably spent half the year in training, do have the stamina to stay up all night long then grab a bacon roll or even a full fry-up in one of the cafes before hitting the sack around 10am, just as those who need a full seven hours at the end of another action-packed day, are also at breakfast, having just wakened to greet another day.
I confess I fit in the latter category.
…I can hear them scoffing over their late night pints now as they read this in Lerwick.
“He geed ta bed? Whit a wous!”

* You’ll find all you need to know here: www.shetlandfolkfestival.com (remember to pack your stamina pills) 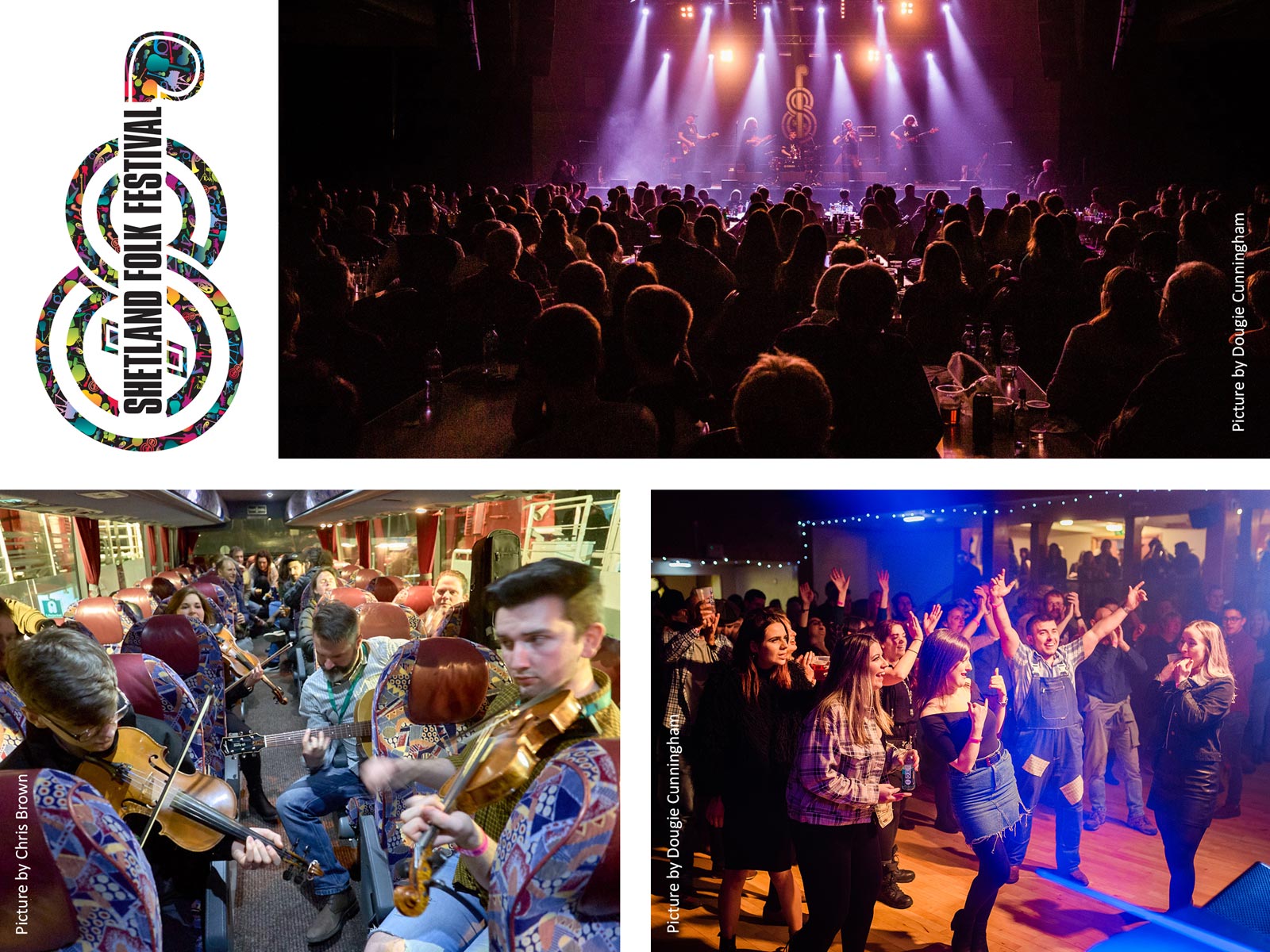 Back to index
A Latvian Rhapsody of Song and Dance

Paying Homage To The Master of Manouche
Scroll to top